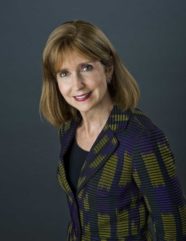 Ambassador Paula J. Dobriansky is a foreign policy expert and former diplomat specializing in national security affairs. She is a Senior Fellow at the Future of Diplomacy Project at Harvard Kennedy School’s Belfer Center for Science and International Affairs and Vice Chair of the Atlantic Council’s Scowcroft Center for Strategy and Security.

From 2010-2012, Ambassador Dobriansky was Senior Vice President and Global Head of Government and Regulatory Affairs at Thomson Reuters. During that time, she was also appointed the Distinguished National Security Chair at the U.S. Naval Academy. Prior to that Ambassador Dobriansky served as Under Secretary of State for Global Affairs.  Among her primary accomplishments, she established and led the U.S.-India, U.S.-China, and U.S.- Brazil Global Issues Fora — which advanced crucial work and international cooperation on environment, energy, health, development, and humanitarian issues.  Additionally, she was head of delegation and lead negotiator on U.S. climate change policy.  In February 2007, as the President’s Special Envoy to Northern Ireland, Ambassador Dobriansky received the Secretary of State’s highest honor, the Distinguished Service Medal, for her contribution to the historic devolution of power in Belfast. During her more than 25 years in national security affairs, Ambassador Dobriansky has held many Senate-confirmed and senior level positions in the U.S. Government including Director of European and Soviet Affairs at the National Security Council, the White House, Deputy Assistant Secretary of State for Human Rights and Humanitarian Affairs, and Deputy Head of the U.S. Delegation to the 1990 Copenhagen Conference on Security and Cooperation in Europe (CSCE).